Turn IT On’s specialism, and its widest experience, is within Primary schools. Many of our consultants used to be primary school teachers, including Tom Welch, the Founder of Turn IT On, and me.

I taught upper Key Stage 2 at Millfields Community School in Hackney. It is a superb school with passionate and dedicated staff. The huge Victorian school building is a landmark in the local community and the school, with its Autism Resource Centre and the attached Children’s Centre, works to provide a hub of extended school activity.

However, one area that needs improvement is… the playground!  Millfields Community School is one of the largest primary schools in Hackney but has the smallest provision of outdoor space. An extremely innovative design is needed in order to make the best of the limited space and the school now has a plan to make this happen. It is releasing a Christmas single.

The song is called ‘C-H-R-I-S-T-M-A-S’,  by Jonathan Hart.  He wrote it back in 1985 when he too was a primary school teacher.  Jon Hart is also my father and I remember singing it when I was a child.

It has now been recorded, with all 620 Millfields Community School pupils (aged 5 to 11) singing their hearts out and is available on iTunes HERE or as an original CD HERE.

As well as money for the playground 20% of the funds raised from the single will be going to UNICEF’s campaign, ‘Sing for Syria’.

While I was teaching at the school I worked hard to get the United Nations Convention on the Rights of the Child (CRC) put at the heart of the school’s planning, policies, practice and ethos . Jon Hart, who was by then working for UNICEF,  inspired the  school to work  towards the UNICEF Rights Respecting Schools Award and I am proud that it was the first school ever to receive this award.

So, this is a plea to help both Millfields Primary School and UNICEF. Buy this great song and help to make it a hit for Christmas 2013!

Here’s an article in the Hackney Gazette. Also, keep a look out for the official, full music video. It was made by two parents and features many of the children. It is released this week and it is brilliant! 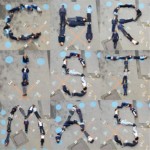