As a teaching consultant I find myself using a tried and tested range of apps and programs to teach coding and digital literacy to year one through six. Personally, I think the new direction for computers in the classroom is a fantastically exciting one but already, in teaching circles the same software and hardware seems to be coming up time and time again – Bee-bots, Scratch (a programming language for children), Kodu (a free Microsoft programming environment) and a range of apps on iPads that teach coding skills. While I (and the children!) thoroughly enjoy using these and other tools, it did get me thinking about other programs, games or pieces of hardware that exist but may not currently be part of this zeitgeist.

It was an article on the use of Minecra 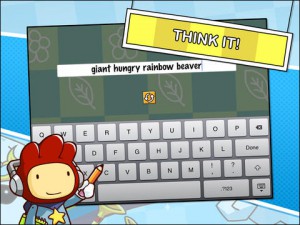 ft in schools that got me considering this problem from a new angle. As a self-confessed video-game fan – and being fully aware of the motivational boost using games in learning can give children – I cast my mind back over the games I had played in recent years, carefully considering the educational merits of each. There was one that stood out from all the others – Scribblenauts. This is a game that was released for the Nintendo DS back in 2009. The premise is simple; the hero, Maxwell has to collect ‘starites’ in order to complete a level. However, the starites are often hard to reach or guarded by something ferocious. In order to overcome these challenges, Maxwell has a magic notebook into which he can write a noun and upon pressing enter this then pops into existence. For example, if the starite is on a high ledge, writing ‘ladder’ into the notebook will create a ladder for Maxwell to climb, giving him access to the starite. Perhaps a lion is guarding the starite? Not a problem! Typing ‘steak’ into the notebook immediately provides a tasty treat to distract it with.

The implications for Literacy are immediately apparent. Scribblenauts could be used for storytelling – the children could set a scene in free-play mode and see how the creatures and objects interact with each other. They can take notes from what they see happening and then use these in their story. The other obvious application is spelling – the students need to use their phonics if they have any chance of spelling a word close enough for the game to provide a list of ‘Did you mean…’ words. Scribblenauts doesn’t prohibit poor spellers from playing, it gently guides them towards the word they were thinking of and shows how to spell it correctly.

While this immediately seemed a promising resource for spelling lessons or small group work, the age of the game coupled with the need for a Nintendo DS to play it on gave me pause. Would schools want to invest in aging equipment for a game that they may occasionally use with a few children? Probably not. Thinking about the hardware t 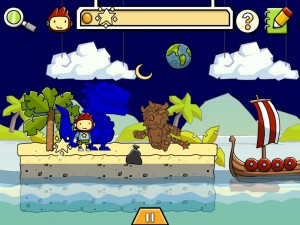 hat a lot of schools already have in place, it was on a whim that I decided to check the App Store to see if there was an iPad version – lo and behold, Scribblenauts Remix is available for iPads and what’s more, it’s free.

Having tried it out with a small group of students at one of my regular schools I am happy to say that it went every bit as well as I hoped. While some children wanted to start at level one and work their way through the challenges, others spent all of their time experimenting with different combinations of animals and items. The new version includes the use of adjectives too, so not only did we have a purple t-rex fighting a robot dragon, we had an excellent discussion about what an adjective and a noun actually are!

If this sounds like the sort of exciting use of technology that your school embraces, then feel free to contact us to see what else we can do!